How to Use Weenies To Guide Your Players [TATT #44] 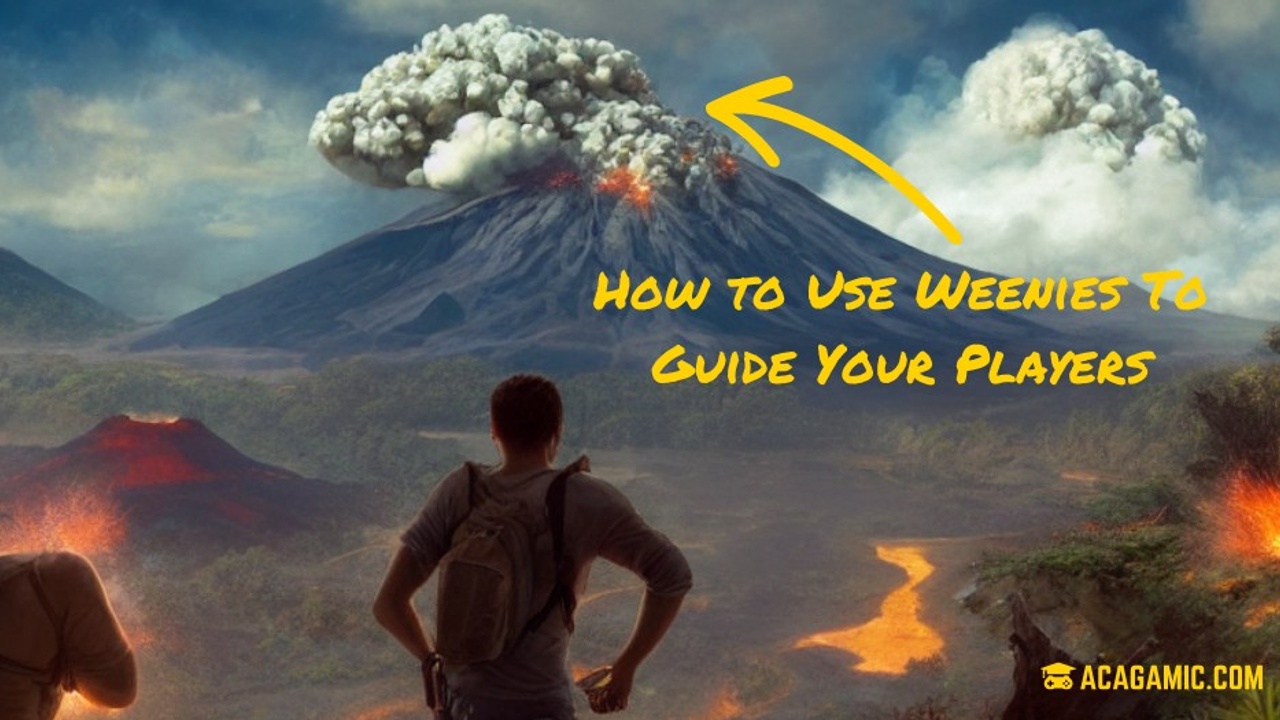 In today's issue, I will show you several different ways how to design weenies in your game, so you can guide players through a level without pushing them in a direction. Walt Disney coined the term "weenie" to refer to the technique of using a sausage to guide stage dogs on movie sets. The classic weenie is the castle at Disneyland. In "BioShock," players encounter Little Sisters, young girls who have been genetically modified and trained to collect a valuable substance called "Adam" from corpses. The Little Sisters could be considered weenies, guiding the player through the game's levels and leading them to Adam-rich corpses. In the game "Half-Life 2," the player starts off in a train station and must navigate through City 17 towards the Citadel, which serves as a weenie location because it shows the player where to go in the game's world.

Use Weenies To Guide Your Players: Weenies can be a glowing light, a distinguished character, or a prominent landmark that leads a player toward crucial objectives and navigates them through levels.

A beacon in the virtual world, the term "weenie" designates an element that guides the player through the complexities of your video game. Whether taking the form of a glowing light, a distinguished character, or a prominent landmark, these visual markers lead the player toward crucial objectives and navigate them through levels. Video games use weenies as essential tools for orienting the player's journey.

If you want to craft a fully immersive gaming experience, your must thoughtfully consider the use of weenies. These visual guides should be clear yet subtle in their direction, never overwhelming the player's journey. As a designer, consider the following tips in the creation of effective weenies:

Make them relevant to the game world Weenies should fit seamlessly into the game world and feel natural to the player. For example, in the game "Red Dead Redemption 2," players can follow a bird to find hidden treasure. This weenie not only serves as a guide, but it also adds to the immersion and realism of the game world.

Although they can be helpful, overusing them can lead to an overly simplistic experience or make it too easy for players to progress through the game. It is important not to rely on weenies too much. Overusing weenies can lead to player frustration and a sense of hand-holding. Instead, try to use them only when necessary, such as to lead the player to a particularly difficult or hidden objective.

Use them to tell a story

Weenies can be used to tell a story or convey information to the player. In the game "Uncharted 4: A Thief's End," players follow a trail of clues left by the protagonist's brother to locate a treasure. These clues serve as weenies, leading the player through the game world and revealing bits of the story as they progress.

Experiment with different types of weenies

Use them to enhance player agency

Weenies can be used to give the player a sense of agency and choice, rather than simply following a predetermined path. In the game "Shadow of the Tomb Raider," players can use a survival instinct ability to highlight important objects and enemies in the environment. This allows the player to choose which objectives they want to pursue, rather than simply following a linear path. In the broader sense, this could be seen as players choosing their own Weenies.

Interactive weenies can add an extra layer of depth and immersion to your game. In the game "The Last of Us Part II," players can use a listening ability to detect enemies and other important objects through walls. This not only serves as a weenie, but it also adds to the realism and tension of the game.

Balance the use of weenies with exploration

While weenies can be useful for guiding the player through a game, it's important to balance their use with the opportunity for exploration and discovery. In the game "Horizon Zero Dawn," players can use a focus ability to highlight important objects in the environment, such as enemies or collectibles. However, this ability is time-limited and must be used wisely, encouraging the player to explore and search for these items on their own, too.

That's it for today.

Designing effective weenies is a vital part of creating a compelling and immersive player experience in a video game. They can be used to guide the player through levels, reveal story elements, and add to the immersion of the game world. Consider my recommendations above to create weenies that are clear, relevant, and enjoyable for your players. By using weenies sparingly, making them visually distinctive, and integrating them into the game world, you can create an enjoyable player experience.

This short paper walks us through "Pirates of the Caribbean: Battle for the Buccaneer Gold," which is an interactive ride combining physical and virtual elements to create a unique experience. Four guests take on pirate roles, with one steering the boat and others firing cannons at 3D enemies. The immersive ride uses 3D screens, surround sound, and motion platform boat. Design focuses on balancing guest control with delivering a high-quality adventure.

When designing Pirates, the authors had to carefully consider how much control guests should have over their experience and how to ensure that each ride was enjoyable. To find the right balance between these two goals, they explored a range of solutions. They worked hard to create an interactive ride that allowed guests to make decisions while still providing them with an exciting journey every time. The takeaways from designing a theme park ride are interesting for game designers as well.