How to design for five player traits [TATT #35] 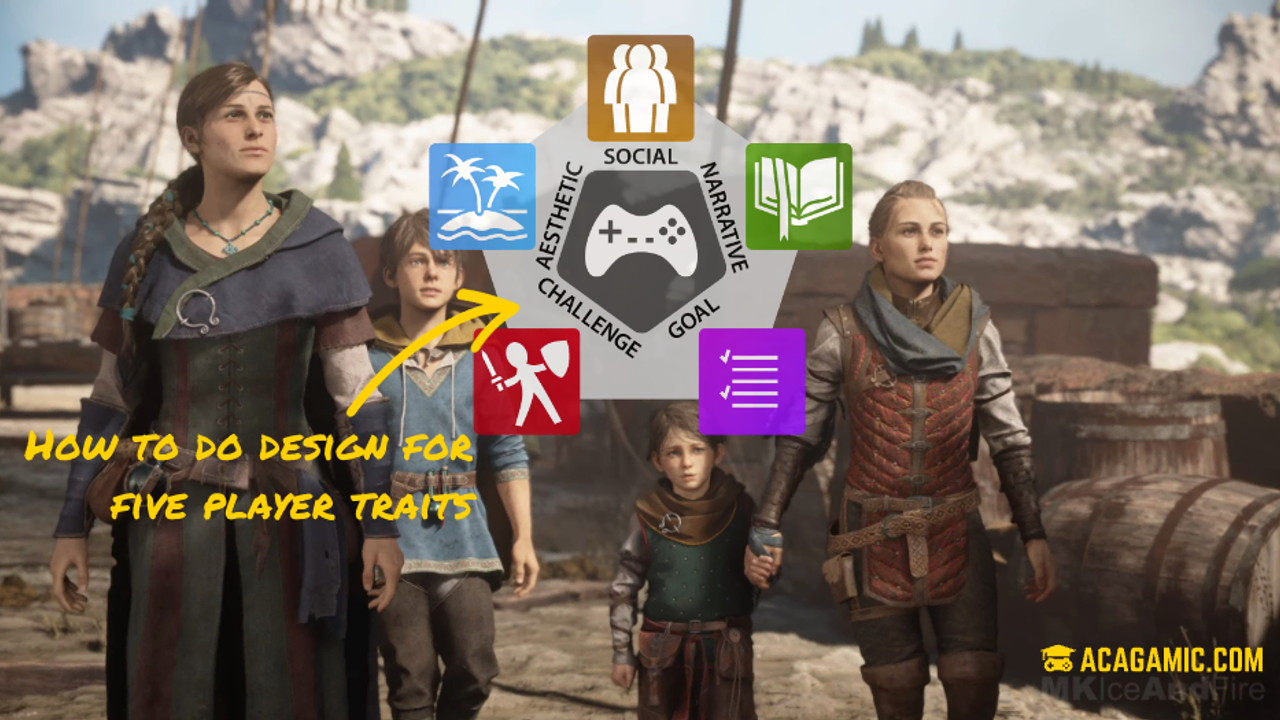 In today's issue 35 of The Acagamic Tip Tuesday, I will show you how to design your game for five different player traits.

Designing for player traits allows you to create personalized game designs and more tailored player experiences in your games. It will enable you to align your game's design better with a stakeholder vision of a targeted audience.

Designing for 5 player traits: Player traits help personalized design and identify game elements that should be more prominent for your target audience.

Unfortunately, player types, specifically Bartle's outdated four player types (of MUD players, not video game players) are extremely popular with junior game designers. Probably because they are simple and catchy AF. (On a personal note—as a researcher—this is highly frustrating as Bartle himself has admitted the flaws of his typology, and personality research in psychology has long favoured trait theories of typologies because they recognize that people’s preferences are composed of a sum of different characteristics. But here I am crying over spilled milk when I'll likely see another junior designer writing a blog about Bartle's 4 player types in the next 5 years. Just stop.)

People keep falling back to the same old 4 Bartle player types (socializers, killers, explorers, and achievers) because they are easy to understand, specifically along the original dimensions (player-world, acting-interacting).

People keep forgetting those types were designed for players of multi-user dungeons, not video games, and no empirical study or assessment was done to confirm that this thought construct is even valid. Bartle even extended to 8 different types later (but because 3D is much harder to draw and understand than 2D, that never really caught on with game designers).

But fret not young designers, somebody (that's my research group) did the work of researching player traits for you already (so more mix-and-match, which is much more accurate for how we play games).

And the best thing is, those five traits are ready for you to use as a game UX designer (and science actually backs up their validity).

So, here are the five player traits and how you design for them, step by step:

Check what the main player traits in your desired audience are

We have extensive documentation for using the five player traits on our HCI Games Group website, including translations and instructions for how to score this 7-type Likert scale.

The 5 player traits are:

People who like playing together with others online or in the same space. These players enjoy multiplayer games and competitive gaming communities.

These players like aesthetic experiences, such as exploring the game world and noting the game’s graphics, sound, and art style. Gameplay is less critical for them than the beauty of the game.

These are players who love complex stories or narratives. They would not skip the game’s story or cutscenes and never feel the story gets in the way of gameplay.

Players that like to complete quests or tasks and collect digital objects focus on completing game goals and strive to complete games 100%. They explore all options, complete all collections, and so on.

Once you have identified your dominant player traits, focus your design on them

Many game UX designers would attempt to rush into a design process that is focused only on one trait. However, the trick is to design your game to allow players opportunities to foster each of the five player traits.

If you've tested with an initial player sample, and you've found, for example that your demographic is focused on goal orientation, you would focus your design on progress feedback (in the user interface) and allowing players to collect objects and badges for completing parts of the game. If you find there is a challenge-orientation present, you would provide more challenges.

You can see approaches like this in games shipping specific DLC after release, with each DLC targeting a specific blend of player traits.

One sample of players is not enough to evaluate the pre-dominant traits of your target player audience. You will have to repeat tests throughout game development to hone in on the desired combination of traits.

At the very least, the traits provide guardrails for your game systems to evolve around to help you understand what type of game content resonates with players specifically. For example, you could have dedicated areas in your game addressing each of the 5 player traits and let players choose which ones they prefer.

If you want to take the survey yourself, hop over to our website and check your own player traits. And, of course, here are the specific scale instructions (PDF) for free for you to use.

So, of course, we want to link you to our original paper here, where we introduced the five player trait scale. The paper shows how we created and validated the 25-item scale for the five player traits. On page 14 of the paper, have a look at table 6, where we show which game elements best work with which player traits. For example, you'll find that people with goal orientation are likely to prefer playing puzzles, role-playing, and virtual goods games. And, of course, people with narrative and aesthetic orientations enjoy playing role-playing and simulation games the most. Players of sports and card games usually don't need narratives at all.

The caveat of the work is that it comes from self-report answers and we have yet to confirm that this holds with how players behave in games.