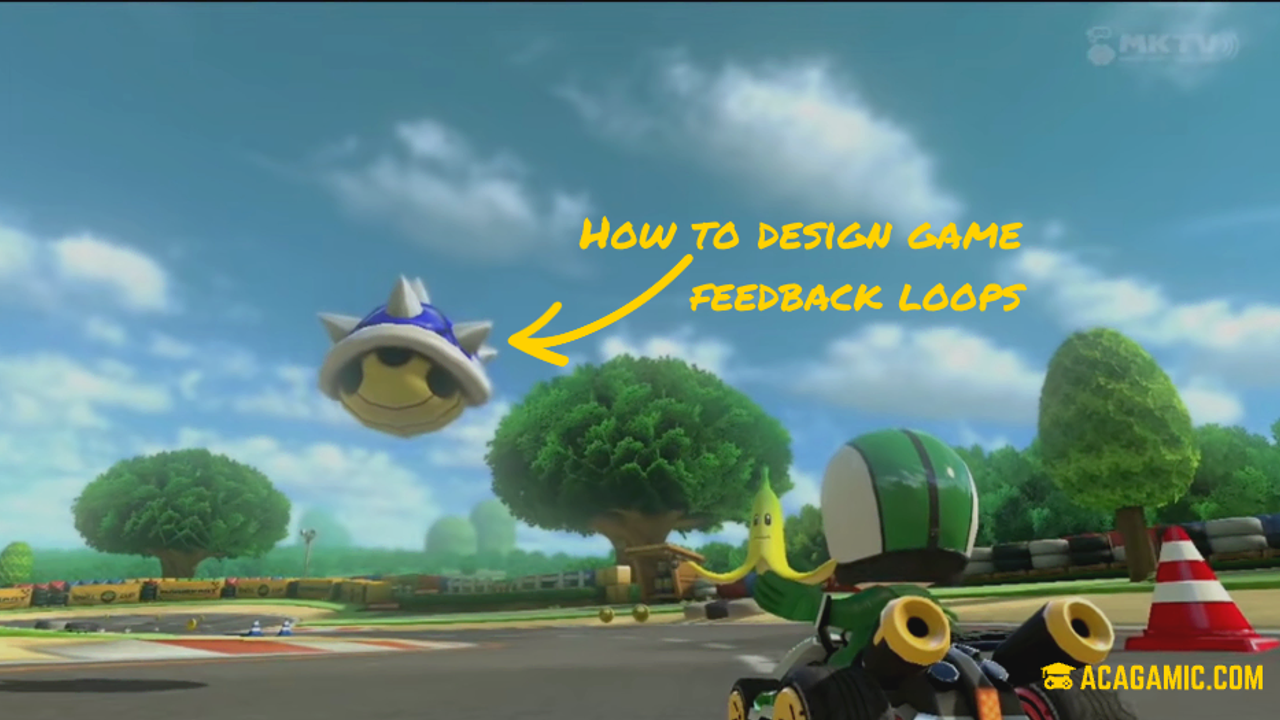 In today's issue 39 of The Acagamic Tip Tuesday, I will show you how to design feedback loops in games to create more engaging gameplay experiences. I consider this game design strategy a core UX design approach for games. Feedback loops provide players with information about their actions and allow them to course-correct as necessary, helping to ensure that gameplay is engaging and satisfying. They can help you to balance your game system or make it more competitive.

Feedback loops are vital game design tools: A feedback loop is a process in which the output of a system is used as input to that same system.

The 3 benefits of game feedback loops are:

Unfortunately, many designers do not know what feedback loops are or how to use them effectively. I will help you understand what they are and how to use them.

A feedback loop is a process in which the output of a system is used as input to that same system. In game design, feedback loops create a sense of player progress and motivation. Feedback loops can take different forms depending on the type of game you're designing.

Feedback loops are essential for game design because they allow designers to create a repeating cycle of engagement and reward. When done correctly, feedback loops can keep players playing a game for hours or even days.

For example, if you have a game system where whenever a player scores a point, they get a reward, like an extra turn. This reinforces the positive effects of your reward and creates an advantage for that player. This feedback loop encourages players to keep playing by offering them a tangible incentive. Feedback loops can also be used to generate difficulty levels in games. For instance, if a game gets progressively more challenging when you play it, that's another feedback loop. By making the game more challenging, players are motivated to keep playing to overcome those challenges. Feedback loops ultimately help keep players engaged with your game by offering them rewards or challenges that keep them coming back for more. This promotes divergence in the game. Good people will get better much faster. It reinforces the behaviour itself.

For example, in the score-based game mentioned above, players may be motivated to keep playing to improve their score. This feedback loop can quickly lead to the endgame (i.e., the point at which the player stops playing). Some common feedback loop types include those based on levelling up, unlocking new content, or completing challenges.

For example, players receive gold for killing enemy players in Massive Online Battle Arena (MOBA) games like League of Legends (Riot Games, 2009). They can then spend that gold on better items in the shop, which makes them more powerful during the next fight, and, therefore, more likely to win the next battle.

Negative feedback loops exist to promote cohesion among players by discouraging undesirable behaviour. For example, a player who repeatedly kills teammates in a cooperative game may be penalized with reduced rewards or increased costs, encouraging them to stop that behaviour and cooperate with their teammates. Or imagine an example where you must pass your turn to another player every time you score a point in a game. This system would favour people not scoring as many points as you and subtract from your advantage gained by scoring a point.

Players are punished or disadvantaged for successful behaviour in a negative feedback loop. Negative is not equivalent to bad here, but it relates to subtracting something. Your variable gain is turned into a loss.

Catch-up mechanics are designed to give players behind a chance to catch up, while rubber banding ensures that players who are ahead don't get too far ahead. These negative feedback loops help to keep the game competitive and exciting for all players.

The blue shell in Mario Kart games is a well-known item that facilitates a negative feedback loop. In Mario Kart, the racer in the first place gets the worst items, while the last-place racer gets the best. In Mario Kart, many higher power items only become available to you when you are behind in the race, and if you use them well, they can help you balance out the game and catch up to the other players. This creates a dynamic in which the last players always have a chance to catch up, while the player in the first place is constantly in danger of losing their position. In board games or turn-based digital games, it can also be used to balance out the first-move advantage.

How can feedback loops be used to improve game UX?

Feedback loops can provide players with information about their performance, help them learn new gameplay mechanics, or give them a sense of satisfaction when they accomplish something in the game.

Visual indicators provide important in-game information, but displaying them on screen consumes space and increases clutter. Increasing indicator brightness above the levels possible in standard monitors can substantially improve accessibility. To address both aspects, the authors of this paper developed an ambient lighting system for video game indicators using an LED strip attached around the back border of a monitor.

Visual indicators (on-screen + ambient) yielded lower levels of mental workload compared to audio. On-screen scores were on-par with ambient. There was a slight preference for ambient light relative to on-screen indicators, but these preferences may shift more strongly towards ambient light if personal configurations are available to users.

Ambient lighting outperforming on-screen indicators in reaction time is an important result. It suggests that ambient lighting solutions could be considered over on-screen notifications when developing systems that have the purpose of getting a user’s immediate attention.