How to Check Your Game UI for Good Contrast [TATT #42] 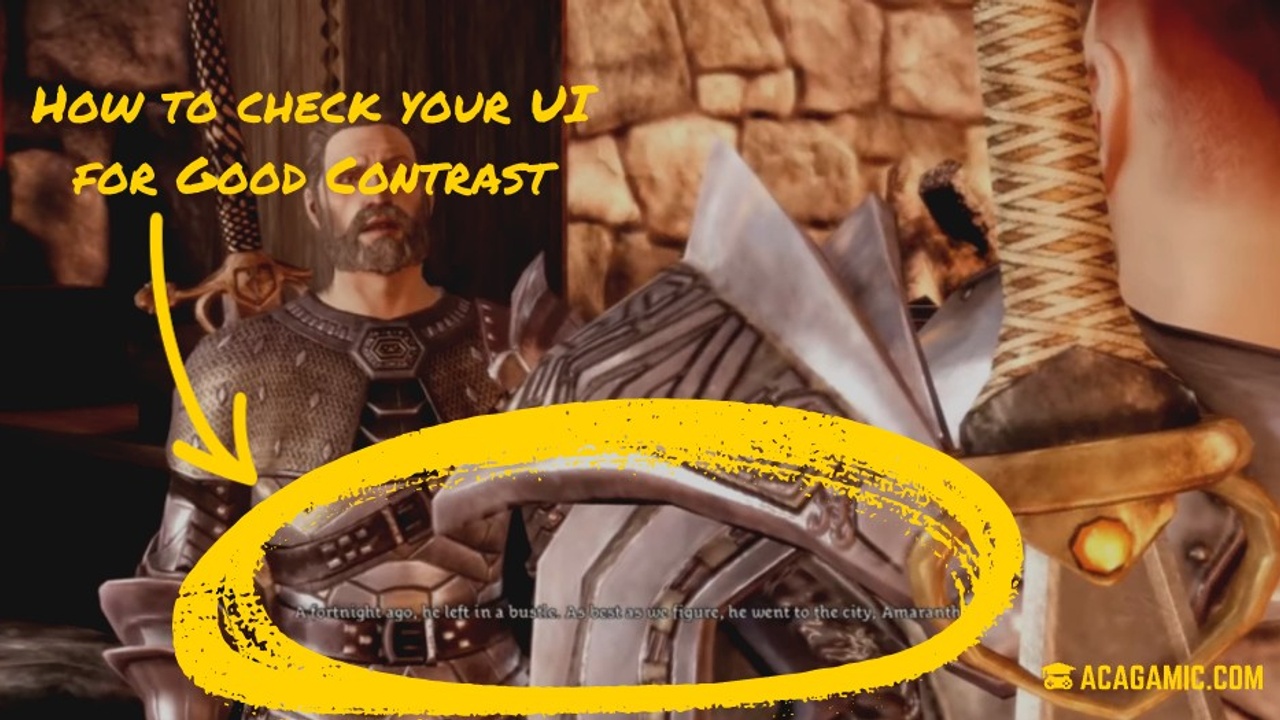 In today's issue 42 of The Acagamic Tip Tuesday,  I will show you how to make your game UI more accessible and easier to read with colour contrast to make it easier for all users to see and interact with your game.

Colour Contrast in Game UI: Ensure text and visuals have a high contrast ratio (difference in luminance values) against their background.

Contrast in game UI design is an important yet often overlooked element. Text size and contrast are two of the most common UI complaints. It can significantly impact the overall look and feel of a game and the usability of its menus and controls. 2.9 billion people struggle with low vision, and default game UI settings often lack sufficient contrast for players to use easily.

A contrast ratio is the luminance difference between an element's foreground and background. Support for configurable contrast can help gamers with disabilities increase the visibility of elements on the screen. Ensure text and visuals have a strong contrast ratio (difference in luminance values) against their background. If the contrast ratio isn't high enough, it may be difficult for some players to understand or use certain aspects of gameplay; this could be something as simple as navigating an area via a mini-map. Poor contrast ratios can lead to confusion and frustration, negatively impacting the gaming experience.

This makes contrast an essential element of game UI design, but it can also be a tricky and not obvious thing to work with. This is because contrast involves creating a visual difference between elements in a design, and this difference can be subtle or difficult to discern.

For example, consider a game UI that uses two shades of blue for different buttons. These buttons may look the same to the untrained eye, and the user may have difficulty discerning which button to press. This lack of contrast can lead to confusion and frustration for the player.

WCAG 2 (Web Content Accessibility Guidelines) is a set of guidelines and standards for web accessibility. The guidelines are developed by the World Wide Web Consortium (W3C), an international organization that sets standards for the web. WCAG 2 aims to make web content more accessible to people with disabilities, including those with visual, auditory, motor, and cognitive impairments.

WCAG 2 specifies a minimum contrast ratio for text, images of text, and graphical objects to ensure that all users can see them. It defines "luminance" as the measure of how light or dark a colour is relative to its environment, with higher numbers indicating greater brightness. The contrast ratio is calculated using the difference in luminance between two colours: if one colour has twice the luminance of another, it has a contrast ratio of 2:1.

Too little contrast makes content difficult to read for people with vision impairments or other disabilities, so ensuring adequate levels are maintained throughout game UI design is important for making sure everyone can enjoy your game. Usually you'll be good if your game UI has either an AA or AAA level of contrast between elements on screen - this will ensure everything is easy to read and interpret quickly by players.

How to Check Your Colour Contrast

If you want to check the contrast between two colours, I recommend four tools:

Colour hue is the range of colour shades, or hues, used in a design. For example, shades of red could include maroon, pink and scarlet. Colour contrast refers to the difference between two or more colours within the same design. It’s crucial for designers to be aware that colour-blind users may not perceive subtle differences in specific colour hues but can still distinguish differences in colour contrasts. This means they can recognize different levels of brightness and darkness even if they cannot identify certain colours accurately. To create designs that cater to both users with normal vision and those with colour blindness, it's beneficial for designers to focus on creating good contrast regardless of specific hues used within the design. Alternative methods, such as symbols or icons to help differentiate elements within a UI design.

Good contrast between text and the background is critical in game UI design as it makes the text easier to read. For example, dark text on a light background usually works better than vice versa. Players with cognitive disabilities may struggle to perceive text in high-contrast UIs. High contrast should be supported, but with configurable options for greater accessibility. The WCAG contrast tests can fail to identify text perceived as more readable for people with and without colour blindness. The guidelines are designed to be general and flexible and may not provide specific guidance for all types of content or situations. As a result, designers and developers may have to interpret the guidelines and decide how to apply them in specific cases. Provide players with a choice to customize UI and ensure accessible text. Remember that onscreen elements may not meet contrast ratios in all gameplay scenarios due to changing visuals.

Additionally, you should make sure that the font size and style are appropriate for your game's target audience—if they have difficulty reading small fonts, then it could ruin their gaming experience (see the example picture of Dragon Age: Origins above). Finally, don't forget to test out how your UI looks on different devices with different resolutions; this will help ensure that all players have an optimal viewing experience when interacting with your game's UI. For example, many PS5 games have notoriously small text even when displayed on a large TV, depending on the viewing distance of the player from the screen.

Other game UI areas where contrast is essential are (for more examples, check out Microsoft XAG 102):

In conclusion, contrast is a vital factor in UI design for games. Visual game elements, health and bonus meters, maps, buttons, and symbols should all have good contrast to ensure that they are easily visible to players. Additionally, accessibility settings menus should allow adjusting contrast. By paying attention to contrast, game designers can create a more accessible and user-friendly game experience for all players.

The authors propose a vocabulary that builds on existing knowledge in game accessibility and includes terms representing essential concepts in accessibility in digital games. The proposed vocabulary is intended to stimulate discussion and break the silence on accessibility in games. They conducted a content analysis of existing guidelines, and identified high-level groupings that were used as terms in the vocabulary. The proposed vocabulary includes terms related to access to controls, enablement to meet the challenges of the game, and the player experience. The authors suggest that this vocabulary can be used by designers to develop accessible player experiences.